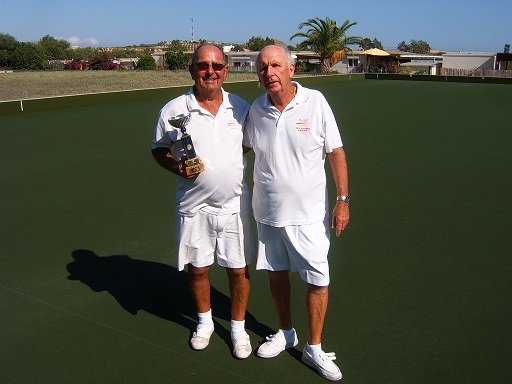 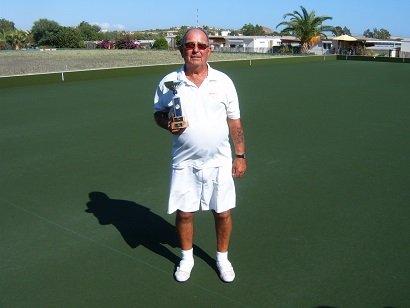 The Non Winners Singles is the first of the 2013 autumn competitions for those members who have not won a singles competition here in Spain or UK during the last five years. Unfortunately only twelve members entered this year.  This was reduced with one member not turning up. To ensure that the competition took place some experienced members who complied with the requirement above, took part. Some of these players were shown the way with good performances from new bowlers. It would be nice next year for many of the eligible members to take part.

On Monday 7th October, the first day of the competition, two of these new bowlers played extremely well with Chris Brown knocking out myself and Stuart Beetham doing the job on Kevin Johnson. These two then continued to play well and reached the semi-finals by defeating Joan Parsons and Ron Lloyd respectively. Friday 11th October the two semis took place in the morning.

The first Semi-Final was between the new bowlers, Chris Brown and Stuart Beetham. After watching these two over their previous games, it was expected to be a close encounter. However it proved to be disappointing for Stuart and exciting for Chris who maintained the standard of quality play, winning comfortably.

The second Semi-Final between Sue Mannall and Jim Pike started well for Sue who went six shots ahead at the fourth end juncture. Jim then settled down and inched ahead until the tenth end when scores were even. The next two ends Sue put on the pressure and went ahead by two shots. Jim’s experience then showed and continued to increase the pressure and winning by eight shots.

On Friday afternoon the scene was set for the Final, with lots of members watching on the terrace with anticipation of a good game. Our new star, Chris Brown against the ‘old timer’ Jim Pike. The way Chris had played in the early rounds he was a good bet to win as Jim was finding it hard with his past games and the very stuffy weather. However Chris was unable to produce that same intensity of play, whereas Jim played a steady experienced game, apart from a rare wrong bias shot on the penultimate end, he didn’t allow Chris to progress and therefore winning easily. Hats off to Chris for getting into the final and all I can say is watch this space!!!! Our Captain, Colin Wright, just arrived back from UK, presented the Trophy and congratulated both finalists. He also thanked the spectators for their support and the markers, who without, we couldn’t run the competition.