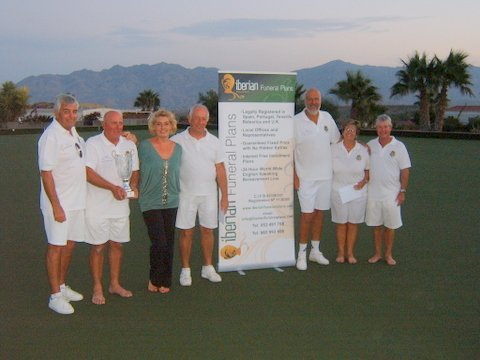 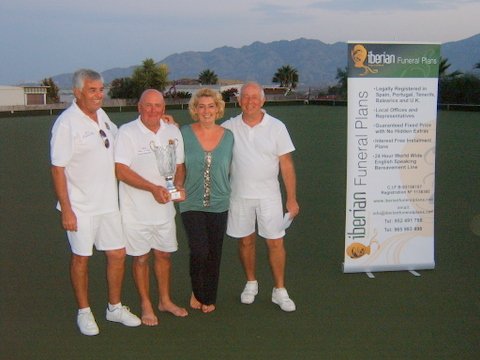 The Iberian Challenge Cup is a new open competition for Almeria Bowling Club which replaced the ABC Invitation Open Fours. This is the 321 round-robin format, where teams of three players play six ends of Triples, six of Pairs and finally six ends of Singles over a set period of two hours.

The competition was open to Cabrera, Indalo and Almeria bowling clubs. Twenty four teams divided into four groups, A, B.C.D, took part over three days, 25th, 26th and 27th October. Where on Sunday afternoon on the 27th, the winners of group A played group B and group C played group D in semi- finals then followed by the Final.

The quality of play was excellent throughout and hats off to all who managed to play well in spite of tremendous hot weather. All successful finalists played for Indalo Bowling Club.

In the first semi – final Doreen Hall. Andy and Jill Cooper against Gerard Donck, Keith and Linda Lester were good to watch ending with a win for Gerald’s team.

The other semi-final between Margaret Maltby, Graham Marlow, Myles Micklefield and Mick Johnson. John Deadman, Keith Harvey. This was a close match where Margaret’s team won the triples discipline, lost the pairs with a difference of two shots in Micks favour who then finished the job by winning the singles by one shot.

The scene was set for a very good quality final which did not disappoint the many spectators that watched.  Mick’s team won the triples comfortably; Gerards  team won the pairs by four shots and needed to overcome two shots behind in the singles. John Deadman played the singles against Linda Lester and wrapped the final up giving Micks team the Championship.

Our Captain, Colin Wright thanked all those that played and spectated for their support during the three days. For all the work Brenda Tidswell did writing up the score cards. Our sponsor Dawn Coleman, proprietor of Iberian Funeral Plans then presented the Iberian Challenge Trophy and cash prizes for winners, runners up, followed by the two losing semi-finalists. Thanks to the management and staff of Miraflores restaurant we then enjoyed a marvellous carvery to finish the great weekend.