This is the last monthly report for 2011 and as usual Joan and I are in UK enjoying life, but looking forward to returning to Spain at the end of January.

On December 1st after the Thursday Roll up the AGM took place. Attendance was just acceptable, but not good. The committee really don’t how much easier we can make it to get more of our members interested in coming to this important occasion. The only change to the committee was the valuable addition of John Fitzgerald, who is now our new Vice Captain. Thanks to Ken Bush for his work during 2011.

Unfortunately the same applies apropos attending members and friends to the Christmas Dance and presentation, which was held in the Miraflores Ballroom on the 8th December. However those that came thoroughly enjoyed themselves. The Prize giving was again disappointing with the many of the recipient’s not being there or arranging someone to collect prizes. Thanks to Ann Tuplin, Catherine Patrick and of course Shirley Jackson for the work involved making this occasion a success.

In last month’s report I mentioned that the CALB 11 a Side was going well for Almeria teams in groups Blue and Red. Unfortunately Jim Pikes Red Group fell by the wayside in their last game at Indalo B.C. However Colin Wright’s Blue Group were never out of the leaders position from game one on 1st November and sailed in to take part in the Final against Indalo B.C. at Cabrera on 13th December. Well done to all the disciplines who won their games, apart from the Ladies Pairs, giving Almeria a win for the second year running

The main news is of course the building of our new carpet which to date is going extremely well in spite of some horrendous rain periods. I have kept a log of the progress which can be seen together with a full account of above 11 a Side competition with photographs and Dinner and Dance etc. These can be found on our website www.bowlingalmeria.co  My information is that if things continue as they are now, the carpet will be start to be laid in week starting 16th January, giving us an on time start and allowing bowling to commence before the end of January.

Because of the above, as you are probably aware the fixtures for December and January have been disrupted and hope to be played when able during 2012. Thanks go to Sue and John Mannall for organising the fun day on Boxing Day when eighteen members and family attending thoroughly enjoyed themselves during a mixed weather day. Anthony, Sue and John’s son won the ‘Best hat’ competition, judged by Pacco and Charlotte of the bar staff. Sue, Ann Clough and Alan Deacon won the Triples competition.

Anyway everyone enjoy the New Year, especially playing on our new carpet. 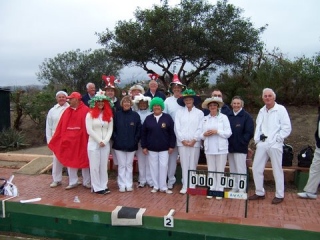